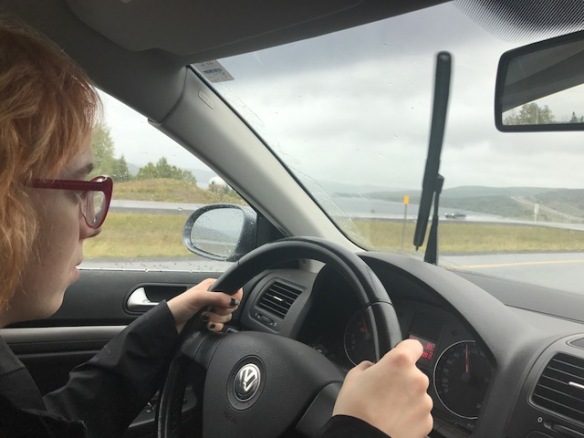 Jazz and I had just taken the exit to Hwy 85 at Riviere du Loop in Quebec, and were passing a garbage truck, when I put The Reverend Horton Heat’s ‘Five-O Ford’ on the radio. Jazzy was freaking out a little bit, and I couldn’t have been more proud.

She was behind the wheel, and that garbage truck was the first vehicle she ever passed – EVER! And it was on a highway at 120 km/h.

I was super keen to get her behind the wheel – even if it was just slightly before she was ready for it. I’ve been teaching her to drive when I can, but lessons have been limited to learning how to shift with a manual transmission. We’ve done a bit of driving around the neighbourhood, but avoided the main streets.

I just didn’t have enough time to teach her everything she needed to know.

When did that happen?

I remember vividly, the road trip I took with her, at seven years old, to leave her with PJ in Vancouver. Bittersweet layered with bittersweetness. No longer would I get to be an everyday part of Jazzy’s life. From then on, it was holidays – and bittersweetness would be a signature part of my Jazzy/Daddy experience ever after.

When I got her back for high school, she was a different person. She wasn’t 7 year-old Jazzy anymore. She was some new girl, whom I had to reacquaint myself with.

I smiled from the passenger seat at her, while she completed that pass – half shitting herself. Ten years ago, she was in that same car, in the back seat reading her books. Now she was behind the wheel, driving off into adulthood.

No way in hell I was going to miss this trip to Halifax. Ten years ago, I left her on the West coast. Now it’s Atlantic Ocean air that will blow in through her dorm room window every morning.

She may not be quite ready for the streets behind the wheel of any car, but she’s damned ready for this next chapter in her life.

Me and bittersweetness left her on campus at Dalhousie an hour ago. We’re now having a drink together in a Pub on the harbour.