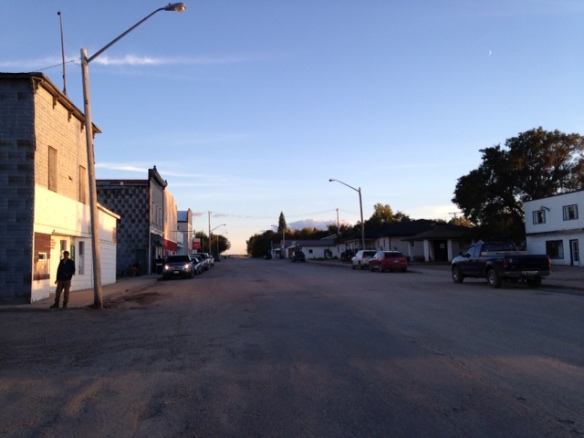 A week ago today, I woke up on a couch, on a farm, 5 miles outside Mossbank, Saskatchewan – and I was in some kind of fog. I had spent the previous night celebrating the launch of my series at the town hall. We drank all night, and listened to episodes 102 and 103 of the sitcom – the later being about the town of Mossbank itself. At the end of the night, there were a number of shots left over, that couldn’t be poured back in the bottle – so it was only polite of me to help everyone drink ’em.

Twenty-four hours later I was in Toronto, and my Saskatchewan summer had officially drawn to a close.

I’ve been here a week, and I’m still figuring out all my routines. It took me a moment to remember where all the light switches were in my apartment.

On Sunday the pilot script from the sitcom was read at Toronto Cold Reads. It seemed an appropriate way to reintegrate myself into Toronto because the series was born at TCR almost a year ago. Monday, I hung out on Queen St. E, mapping out my next few weeks, and following up on things I left behind in Regina. Tuesday was spent editing at the cafe on Kingston Road, near my house. Wednesday, I put my name back in circulation – visiting a number of production offices around the city. Thursday, I attended a talk at TIFF given by Bruce McCullah (Kids in the Hall), about his latest TV series. It was good to hear his stories about the craft and challenges of his world.

Today has writing and research on the plate. Later tonight I have a number of writer colleagues coming over to sit around a bonfire. I recently downloaded a number of pitch documents written by Javier Grillo-Marxuach (‘Lost’, ‘Charmed’, Medium’), and we’re going to go through ’em to see what we can learn about writing our own pitch docs.

It’s good to be back. I’m excited for what the next few weeks will bring.