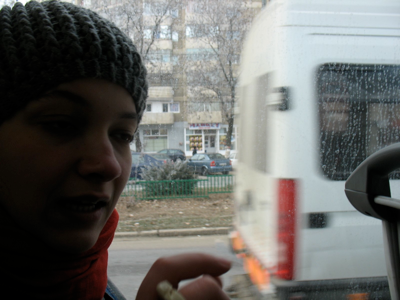 Laura and I took bus 91 to Universitate and hung out at Cafepedia.  She read a book I brought with me, (‘Story’ by Robert Mckee) while I wrote.  After a few hours we headed off for the Unirii Shopping Centre, across from Unirii plaza.  Cosmote was open and I finally got my cell phone working.  We then set off to meet some friends of hers at a bar that was in the area.

Laura’s friend Tudor, has a Ph D in political science and left Romania to travel the world two months after the Revolution of December 1989.  He came back 10 years later to a country he barely recognized.  Along with his other friend Dan, we drank heavily and discussed politics, philosophy, and travel.

Romanians are a frustrated lot.  They have absolutely no faith in their political leaders. After 50 years of communism, followed by 20 years of a corrupt and scandal prone democracy, history tells them not to get their hopes up.  They see things taking a turn for the better with admittance into the European Union, but change is a bitch.  It’s happening too fast for some, not fast enough for others, and for everyone, it always seems to occur in the wrong place, at the wrong time.

The people I cross paths with always give me a crazy look when I tell them that I love Bucharest.  They can’t understand why a foreigner would see anything worthwhile in their city, or even their country for that matter.  Romania has been such a poorly run country, for such a long time, they’ve developed a kind of esteem issue.  I compare it to Regina a few years ago when it seemed nobody wanted to build their future in there, and were embarrassed to admit they even lived in the city.  Regina now leads the country in economic growth and people are moving to the city because it’s a place of opportunity.  I think Bucharest is walking the same path… I see great things for this city, and this country.  I see a highly educated population.  I see amazing architecture.  I see a rich culture.  I see beauty everywhere I look.  I see a city changing for the better.

Tudor encouraged me to try ‘A Passport to Hell’,  a type of flaming shooter.  Unfortunately (perhaps fortunately) the bar didn’t have all the ingredients.  Instead, Laura and I shot B52s.  As the place filled up, people started to dance, so Laura and I took a few spins across the dance floor.  We got home at around 1am.