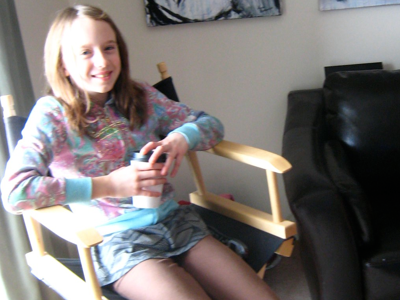 It’s been a few days since I wrote anything in the blog.  My mind was on a desperate philosophical journey.  I handed in an essay on Feminist Epistemology and I wrote my philosophy final exam.  Other than that, I’ve done very little other work.  I don’t mind though, it’s kind of neat to bath so deeply in a philosophical soup.  I suspect I shall remain under the influence for some time.  I may even take it upon myself to learn more about some of the greats.  It’s amazing how much these old dead guys pop up in pop culture, and most people don’t even realize it.

Jazzy has been great, even though she’s been largely ignored due to my philosophical outlook for the week.  Still, I have managed to include her in my activities.  On Wednesday, we spent the entire day together with Courtney at the office.  Court and I were philosophizing and Jazz was computer jigging it in the edit suite.  We nibbled on Chinese food all day and didn’t leave until 1:30am.  Jazz is still living on Vancouver time, and so my nocturnal little girl wasn’t even tired, though she slept a ton yesterday.  I offered to take her to her friend’s place, or anywhere else she wanted to go, but she was just happy as hap, sitting in the edit suite, watching youtube and playing her games.

Jazz also really likes Courtney.  At one point Jazz was on SKYPE with her friend Patience in Vancouver and she grabbed Courtney and brought her into the edit suite, just so she could show Court off.  The three of us are talking about putting a tree up before Christmas, but logistics may have something to say about that.  It’s always tricky trying to share Jazzy with everyone who wants to see her.

Last year Jazzy and I came up with an idea where she would plot her schedule on a calendar and then take it upon herself to ‘book’ herself with various friends and family.  I remember Ryan called me, wanting her to spend time with his girls.  I gave him Jazzy’s cell number.  She told him that she already had a date with her auntie booked, but she’d see if she could push it four hours and call him back.  Sure enough, all on her own, nine year old Jazzy worked her schedule like a pro and managed to get Ryan and her Aunt in on the same day.

Jazzy’s also taken to house cleaning.  I think she might be broken.  I told her to read the ‘how to be a 10 year old’ manual.  All on her own, without asking, she started tidying the living room.  She even asked for a Swiffer so she could dust.  She’s not really into dishes or bathrooms, but fortunately, those things are (mostly) under control to begin with.  I have to pay her with footrubs for all her work.  I don’t mind though, she’s my beautiful little girl (who now fits into her mom’s cloths).