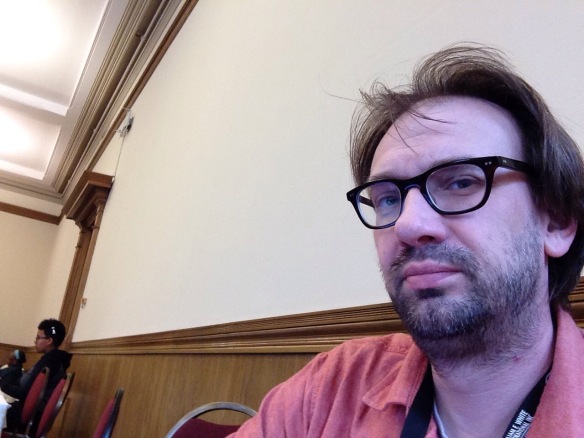 I’m sitting inside Victoria College with a Hot Docs Conference Pass hanging around my neck. I won it at the DGC’s AGM a couple of weeks ago, and I’m somewhat saddened that I won’t get to take full advantage of it.

I start on a movie next week, so while I will have free admittance to all of the documentaries that are screening over the next three weeks in the evenings, the conference itself will be unavailable to me. I think I’m going to get Jazzy to skip a day of school next week so she can go in my place. I’m sure she’ll get a lot out of the panel discussions and other activities.

The spec script is going well. I’ve done so much research on Iran and its nuclear program, that I’m sure I’ve drawn the attention of some clandestine government organization hankering to hook electrodes up to my nipples. The going has been slow because the material is so dense. Also, I procrastinate a lot.

At the Toronto Reference Library yesterday, I sat down for several hours, and kept coming upon niggly little bits of information that I needed to obtain. Things like the names of certain Persian desserts, features of Persian architecture, or the name of a Lebanese photo-journalist who was killed in the most recent Israeli/Hezbollah conflict.

I’m proud of how real the world feels in the script – especially since I started with knowing nothing about any of it. Research allows me to write depth into the characters. It allows me to avoid stereotypes. It makes the story compelling. I almost feel like I’m plagiarizing the 6 o’clock news – from a Persian perspective.

Thus far, I’m half way through Act I. I spent some time cleaning up the first nine pages this afternoon, and I aim to reach Act II by this evening. As I mentioned previously, this script will be five acts plus a teaser.

2 thoughts on “Researching Around the Stereo Types”