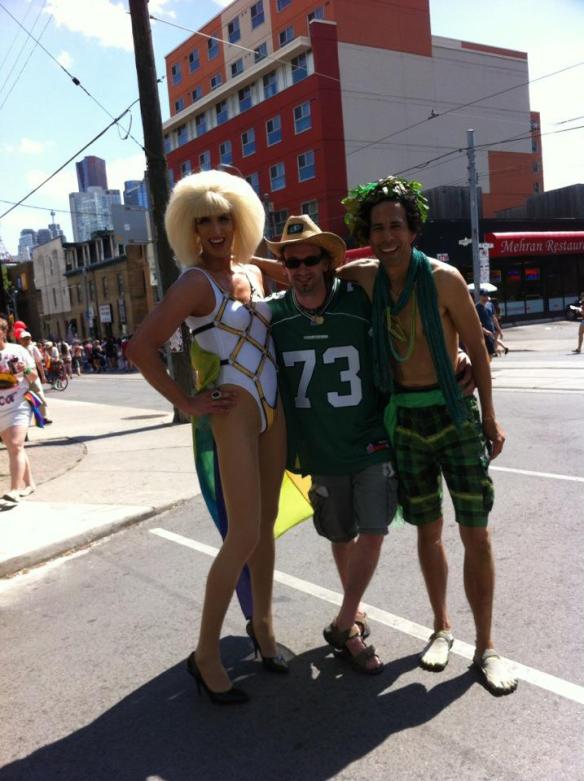 I woke up yesterday morning looking for something Torontoish to do on Canada Day.  To this end, I texted McKenzie to see if she wanted to hang out.  She told me she was marching in Pride in a couple hours.  I asked if she wanted someone to walk with her.

I wore my Rider Stuff because I have ‘Rider Pride’.  People in Regina would have gotten the joke, but in Toronto people just thought I was some interloper who crashed the parade.  I was thrice stopped by cops who told me to get on the other side of the barrier, until I explained that I was with people.

I did have a few Saskatchewan people stop me to say hi, and received a few friendly jeers from other football fans.  The only real difficulty I had was finding our float.  I met Lorne at our designated meeting spot, and was soon joined by Helen and Irma.  They made some phone calls and led us down to into the Valley to find McKenzie and the others.  We walked the whole length knowing full well, we’d just be walking back up again.  When we got to the end, and still couldn’t find our float, more phone calls were made.  Irma informed us that we passed them somewhere, so we RAN several kilometres back towards the front just to catch up.

Irma was misinformed and we wound up backtracking nearly all the way back to where we started.  Then we caught up to where we needed to be and walked the whole parade route again.  The problem wasn’t so much that she was misinformed.  It’s that she walked so confidently into the wrong direction.

McKenzie and her crew were in the parade to promote a show they have coming up at the Toronto Fringe Festival.  I must have handed out a few thousand hand bills to promote the show as we walked the parade route.  It was a great way to interact with people.  I wound up with free tickets to the show.  Gonna need a date – one sporting a vagina would be nice.

Afterwards we had supper at a place on Parliament called, ‘House on Parliament’.  We were thirsty, starving, and ready for a nap.  I got home around seven after making plans with Rachel and Waylon to see the fireworks.  After hitting the pillow for a quick snooze, I decided to stay in.

Pride was enough fireworks for me for one day.

On Friday night I drove down to Hamilton with Josie, a friend from the Argos Admirals.  I had two tickets to the Rider game and nothing was going to stop me from seeing it.  Been looking forward to the game all offseason and my skin was practically tingling as I crossed the threshold of historic Ivor Wynne Stadium for the very first time in my life.

I’ve watched CFL games at BC Place and Empire Field in Vancouver.  I’ve seen games in Commonwealth Stadium in Edmonton, McMahon Stadium in Calgary, Canad Inns Stadium in Winnipeg, Rogers Centre in Toronto, Percival Molson Stadium in Montreal, and now finally, Ivor Wynne in it’s final year of existence.  They’re gonna tear it down at the end of the season to make way for a new stadium.

The Riders were wearing white helmets for the first time in franchise history.  I wasn’t sure I liked them, but I DID like what I saw as the Riders hung 43 points on the heavily favoured Ti-Cats.

I was warned that fans in Ivor Wynne can be almost unbearable towards fans from the other team.  Though an Argo at heart, Josie wore green.  Heard a few stories about Argo fans who were at the game, but chose to don green for their own safety.  In reality, we were treated quite well, even as the Riders spanked the Ti-Cats on the field.  One fan was so nice, he even pinched my nipples for me.  It helped that there was a LOT of green in the stands.  Transplanted Saskatchewanians (Saskatchewanites? Saskatchewaners? I have no idea actually what we’re supposed to be called) come en-masse wherever the Riders play.

After the game I dropped Josie off at the GO Station as I had plans to meet Rod Pedersen at the Riders’ hotel after the game.  I’ve known Rod for years.  He’s the play-by-play radio announcer for the team and he also voiced the first two documentaries of my career.  I’ve learned a lot from watching him go about his business.  Drinks with someone from back home always quenches the thirst a little bit better.

While I was waiting for Rod, I watched the team bus pull up, and players poured out.  I did my best to NOT appear to be ogling them as they walked passed me.  I worked for the Riders for seven years coordinating practice video.  Spent a lot of time around professional athletes.  Still, there I was standing in their lobby, Rider jersey and plainly visible, just like every other fan.  I doubt anyone even cared.

One guy did walk passed me, then doubled back.  “Jarrett?” he asked.  I couldn’t believe it.  It was my buddy Chad!  He was one of my editors for a documentary series I did a few years back.  Saw him nearly everyday for two years.  Last I heard, he was in Montreal working for the Alouettes.

Rod joined us and we had drinks in the lounge.  We talked football, bullshitted some, and caught up on old times.  Rod turned in early leaving Chad and I to chat up one of the players and his dad.  Later, the player’s dad followed us to A&W for an after midnight snack.  I didn’t get home until 3am.  Would have stayed out longer, but the team was flying out of Toronto at 8am.

I watched the Argos game last night in ROOM 31 in Toronto Argonaut headquarters.  Seven of us crammed into a small little room around computer terminals and a LCD TV.  We are all passionate football fans, and it is the best way to watch a Toronto Argonaut away game.  I’m bringing beer next time.

This is going to be a great season.