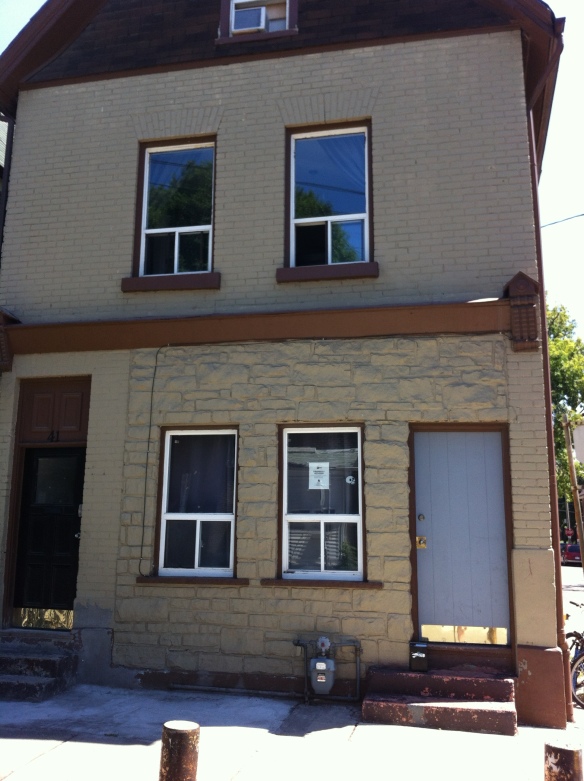 Things are rather chaotic in my life right now.  I can’t really make plans until some of the balls I have orbiting my life right now, run their course.  Even as that happens, more happenings unfold in unexpected ways.

Frank called me Friday afternoon to inform me that the bachelor suite downstairs just came free.  I looked at it and I like it a lot.  I’ll have my own private entrance, tall ceilings, full kitchen, bathroom, living room, and a loft bed.  Tons of storage, plenty of character, and I won’t have to live with anyone.  It costs $50 more per month and it would only take me about an hour to move my stuff.  I could see myself living there until I get myself into a position to once again buy real estate.

There’s a slight wrinkle.  The place isn’t available, technically, until September 1.  In the meantime Frank is now trying to rent out our current space for August 1.  There’s not really a plan in place to deal with potential imminent homelessness, but I’m not too worried about it.  At worst, I’ll crash in Bacia’s place with Frank for a few weeks.  Jazzy’s not really concerned about it either.  It’s all part of our little adventure called, ‘The Toronto Summer.’

I’ve been getting to know the neighbours across the street, Tino and Mary.  Tino’s Portuguese, and has lived a rather colourful life.  He’s a little rough around the edges, but he’ll give you the shirt off his back.  Mary has a daughter who’s Jasmine’s age.  The two took an instant liking to each other – had a sleepover and everything.  Tino can be found most nights sitting on his front porch with Mary, drinking beer and yacking with the neighbours.  He seems to know everyone and he’s fed me many a beer.

When I move into my new place, I want to buy some patio furniture – maybe even a planter box (though it will be too late in the season to grow anything), and some other odds and ends to suggest ‘patio’.  There’s a nook right in front of my apartment where I can sit like Tino does, and watch the neighbourhood go by.  It’ll make me feel a little more like I belong to the place.  I may even share a beer with the passers by.