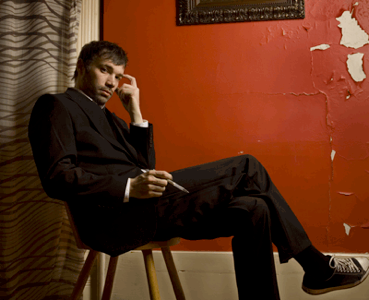 I showed up this morning at Rich Terfry’s house with all my camera gear.  What a great guy!  Also known as ‘Buck 65’ in Canadian music circles (buck65.com), Rich will be the host and narrator of ‘Crimes of the Art’.  I don’t think I could have cast a better man for the job.  His voice, his manner in front of the camera, his folksy yet enigmatic personality, his award winning and critically acclaimed body of work (and subsequent fan base), all contribute to making this series many times more better(er) than it ever could have been without him.

And guess what else?  C’mon guess!

His living room features red walls.  Yes, red walls with paint peeling in all the right places.  Red like blood dripping off the lips of a blood thirsty vampire.  Red like Laura dressed head to toe in red during our shoot in Transylvania.  Red like some other third thing that’s coloured really really red.  His walls are perfectly red.

We were soon rolling and he started narrating the words I wrote for him.  As his voice brought life to the work, it took some effort to keep my mind from drifting to all of the other really great elements that are coming together for the demo.  I could see in my mind Chrystene’s beyond amazing design elements, Laura meandering around Piata Sfatului, the After Effects magic of the editing team, Chrystene’s performance as Mrs Stoker… there were more than a handful of times that Rich finished his read and I was off somewhere in space, musing about the possibilities.  People standing in front of a camera generally like feedback after a take.

The whole morning went super duper alright.  We both seemed to be having a lot of fun and we even looked at some music Rich thought would be good for the demo.  He’s keen to contribute some of his own unreleased music to the demo.  Every new development makes the demo’s potential for success even greater.  I am chomping at the bit to get everything in the edit suite.

I can’t wait to see what the finished work will look like!