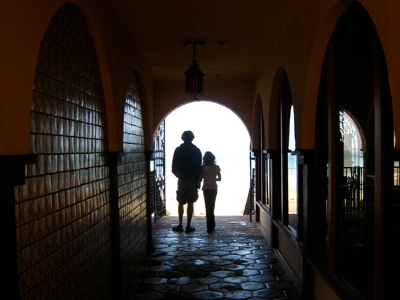 I’m not going to get much work done while I’m here with Jazzy, and I’m okay with that.  Other than staying on top of some emails, and lining up some meetings for Toronto, I just haven’t had a chance to do much writing.  How can I?  It’s just me and my little girl all day long while PJ is at the conference.  I only get to see her about every two months or so, and I just don’t feel like squandering the opportunity when I can write from anywhere, at anytime.

I’m writing this from the side of the pool at our hotel.  I spent the past couple of hours teaching Jazzy the breast stroke and she’s getting pretty efficient at it.  Time stops when I’m teaching her things.  It’s a really great way to live with her inside a moment.

I am fully confident in my ability to come up with something special for ‘Crimes of the Art’ upon landing in Bucharest.  Hell… if I was really worried about a shooting script, I would have had one finished by now.  Back home, the team is plugging away nicely, and their work is excellent.  So many talented people have their hands in this series, I don’t feel as much pressure to carry it on my shoulders as past projects.  If anything, it’s going to be better for that reason.

My only other ‘beach’ experience aside from La Jolla Shores, California, is Wreck Beach, Vancouver, and Vama Veche, Romania.  There’s no alcohol, no fires, no camping, no music, no partying, and no nudity on the beach here.  Vama Veche has all those things in abundance.  Wreck beach has some of those things.  The sand here is nicest of all of ‘em.  It’s very fine and it packs down so you could actually jog on it, bare feet.  Vama Veche is the most fun, followed closely by Wreck.  La Jolla really doesn’t even belong in the same category as the other two.  There’s lots of surfing here though.  Surf rentals, surf boards, surf lessons, surf sections, and surf shops dominate the town.  At this time of year I don’t think much of anything is happening in either Wreck or Vama.  So… La Jolla gets the gold medal for year-roundiness.

It is cooler here than I expected.  Temperature cool I mean, and by temperature cool, I mean about 16 C.  I thought I’d show up in February and be the hardy prairie Canadian boy, bare my chest to the wind, and show off my hardiness.  Insteadiness, I’ve spent most of my time bundled up in my bunny hug, even as I wear shorts where ever I go.  At times, I’ve noticed the locals wearing less than me.  WTF?

Maybe it has something to do with the spray canned cheese they sell down here.