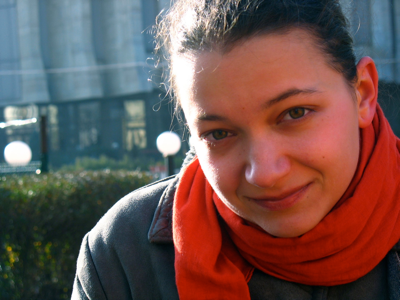 I watched a stray dog sit patiently on the sidewalk at an intersection at a red light this morning.  When the light turned green it crossed, using the cross walk and got on with its day.  Did I really just see that?  I was a bit foggy after the previous evening’s festivities.

I rolled out of bed about four hours after my head first hit the pillow and decided to wander for a bit.  I soon found myself standing alone in Piața Romana on a brand new day, in a brand new year.  It was 10am.

Spent fireworks were laying on the streets and sidewalks everywhere I walked.  That was a HELLOVA party!  I talked about living inside a bubble before… where I was invisible to the city rushing around me… that was me being metaphoric.

This time, I really did have the city to myself.  No one was around, the streets were free of traffic, the shops were closed, and it was just me and that stray dog looking for a place to eat that wasn’t named McDonalds (though I suspect the dog was less fussy than me).  The sun was bright, the air was brisk, and this city of 2.5 million people seemed abandoned.  Nothing, except McDonalds was open.

Bowing to my hunter/gatherer instincts, I brought a couple of breakfast meals back to the hotel for Laura and I.  Soon after, we both found ourselves wandering the streets, looking for something to do.  All we wanted was a cafe to sit in while the fog in our minds lifted.  We found ourselves sitting in front of the National Theatre at Universitate in utter disbelief.  It was after 2pm and we still couldn’t find a place that was open.  We were getting cold.  It was then that Laura thought of ‘Gregory’s’.

We walked passed an outdoor skating rink in Unrii Plaza.  Music was blaring and families skated in packs around the rink, laps after lap.  It was a happy site.  I’ve seen quite a few outdoor rinks in Bucharest.  I didn’t realize that ice skating was so popular.  Having said that, no one knows what ‘hockey’ is.  I enjoyed the thought that I might be the best hockey player in Bucharest at that moment, despite the fact that I can barely skate, shoot, or stick handle.

Gregory’s is a sandwich/coffee shop that also serves beer.  It was open so Laura and I hung out laughing, talking, and watching life go by.  Beer in this country is cheaper than pop.  After about 4 hours, we took the Metro and later caught a tram to Plaza Romania to watch a movie, ‘Sex Drive’.  The movie played in English, with Romanian subtitles.

Once we got home, I crashed while Laura played Warcraft.